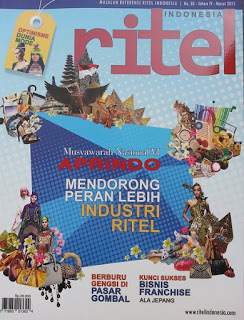 On the 3 November 2014, our office introduced a cashier application that can be used for mobile devices which we call iREAP Android LITE POS. This application is part of our corporate social responsibility program to micro and personal retailer. Because this is part of the CSR program, we distribute this program free of charge and without advertising. This application can be downloaded directly on Google Play.

3 days later, Microsoft announced the release of Microsoft Office (Excel, Word, and PowerPoint) for Android users, after last March’s release in iOS (iPad and iPhone). In this release, Microsoft provide free document editing function, which was more than previous version could do with only viewing function.

In the past few years, I get a lot of input from colleagues in the retail and food industry. The increase in Indonesia’s GDP and lifestyle changes raise the consumer appetite for more spending. It used to be that we eat out to satisfy our hunger, nowadays people eat out to enjoy the experience too. Thus, freemium is an option where with a relatively cheap price, consumer could experience more. For example, McDonald launched McCafe that gives consumers a cafe experience with fast food level pricing.

IT industry has long adopted this freemium concept without us realizing it, e.g. the emergence of open source software which offers free but good quality software, ranging from operating system like Linux to ERP (Enterprise Resource Planning) application such as OpenERP. A much more widely available and used concept of freemium can be seen in the wide world of web where people could look up any information easily (e.g. Wikipedia) whereas not too long ago, we have to search that kind of information by buying expensive encyclopedia books. Today, almost all information we need to know is available on the Wikipedia, with much more complete and updated information than ever before and most importantly, it’s free. Generally, freemium concept is in line with crowd sourcing concept that I will try to discuss it in the next article.

Looking at the example above, we are reminded that although free, the POS iReap Lite application that we launched should still be an excellent product that is user minded and not just there for the sake of existence.

In conclusion, freemium is a concept where we offer a premium product/service for free. Information technology could help businesses facilitate freemium concept. An example in fashion retail industry would be ‘Threadless’ (www.threadless.com), a site that offers t-shirts product and followed by ‘Gantibaju’ (www.gantibaju.com) in Indonesia with a similar concept. Why would Threadless be different from any other site selling t-shirt? For that answer, first we need to look into the term ‘Sub Contracting’. In general, sub contracting means outsourcing part of the work to someone else. There are a lot of reasons for sub contracting, ranging from production efficiency, unavailable resources, etc. Of course, sub contracting comes with its own set of problem such as inconsistent quality, substandard material and so on. Sub contracting is a common practice in production process.

What example can we take from Threadless in terms of IT helping business to evolve? There are two parts to this answer..

1. As a retailer, we are aware that before production can start, we have to come up with a design. For that, we would usually have a design team whose main responsibility would be churning out designs that sells. Threadless transform this conservative practice by creating a community of designers. Anyone could join and contribute in this community. Threadless gives directions periodically in which the community could participate in, for example Threadless launched an 80’s design theme with submission entry date from 15 December – 5 January 2015, a 20 day period. By 1 January 2015 Threadless received 136 designs, meaning on average they received 10 designs per day. That’s pretty neat, isn’t it? What’s interesting is that Threadless has yet spent a single penny for the designs at this stage. Several designs would be chosen and produced and the chosen designers would get a 20% profit from sales of the t-shirt they designed.
With this business model, Threadless is not only efficient but they would have access to an unlimited potential design ideas and creativity that would be difficult to achieve with a conventional practice of hiring a dedicated design team. This outsourcing process would be difficult to achieve with the traditional way of rounding and meeting with the designers individually but with the help of information technology, Threadless could do it faster and easier.

2. After receiving the submitted designs, a retailer would usually have the merchandising division curate the design with selling potential. This is a highly subjective part of process because determining selling potential is a much dependant action to the person selecting the design, although normally it is a team decision. Imagine if we have to select only a few designs in a limited number and time from a large pool of selection, we would see wrong decisions often. This is a highly risky process.
Threadless also modify this process with relinquishing the decision to the community, in which the community would give ranks to each of the design and the highly ranked designs would get to be produced. This way, the process would be objective because the decision would be in the hands of community whom is also a potential customer, thus boosting the sales prospective. If the result eliminates the need for design and merchandising team, then why not?

Who benefited from this business model? Retailer (most definitely) and the designer too; because they would get to enjoy an income from the design and the monthly sales. Freemium concept is clearly visible here where company would only pay a fee once a design has been selected while enjoying a large pool of selection without having to pay for it first. Cost efficient but the company would still get premium quality designs because of the large selection.

This concept has been carried out in Indonesia by ‘Gantibaju’, a new business model here in local market and no longer a distant competition across the world. As a retailer that has been in business for years, it’s time we think where our business will evolve next.